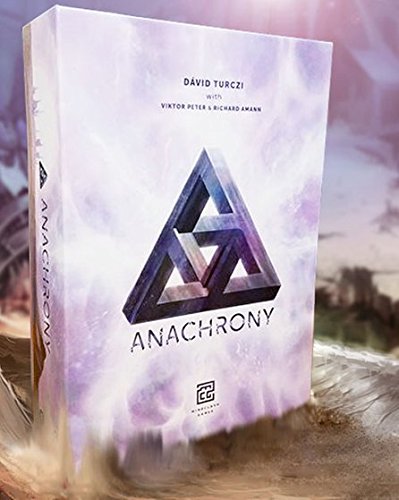 In Anachrony, players assume the roles of the iconic Leaders of four ideological Paths, striving not only for the supremacy and well-being of their people but also their survival. With the foreknowledge that a large asteroid is heading toward Earth, they will plan for the coming impact and prepare their Path to aid in the evacuation of the World Capital, the last independent city. While each path will prove their resilience after the devastating impact, only one will become the home of the new, re-established World Council and the superior power on New Earth.

Discover a post-apocalyptic world in a dystopian future, where mankind stands divided but strives for survival together! Learn the history of New Earth and the discovery of time travel, dive deep into the ideology and culture of the four Paths, and meet their charismatic Leaders!

Depending on when the endgame is triggered, the game lasts between 5 to 7 rounds, called Eras. In their turn, players take actions either on their player board or on the main board by sending their workers to the action spaces.

The elapsed rounds are measured on a dynamic Timeline. By powering up Time Rifts, players can reach back to earlier rounds to supply their past "self" with resources.

After the fourth Era, the end game is triggered by the asteroid impact. Everything the players built on their player board will survive the impact, but the World Capital will not. Each Path has a vastly different objective, called its Evacuation condition, that rewards it with a massive amount of Victory Points when achieved.