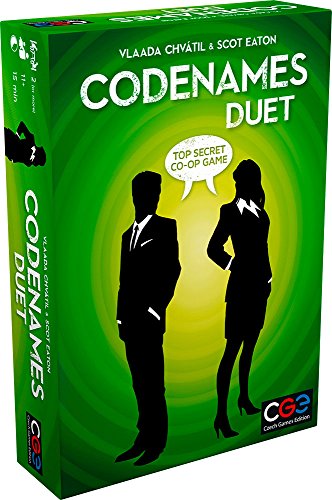 
Your Mission, Should You Choose to Accept it.
Two covert operatives are on a secret mission in a crowded city. Each knows 9 secret agents that the other must contact. Communicating in coded messages, they sneak past enemy assassins in an attempt to complete their mission before time runs out.

Codenames: Duet is a cooperative word game for two or more players. A key card gives you 9 words to give clues and 3 words your partner must avoid. A clue is only one word, but it can point to multiple words that you want your partner to guess. Your partner also gives you clues for the words you need to find. If you both find all the words before you run out of turns, you both win!

With a new way to play, 400 new words that work with the original Codenames, and 100 new challenges, Codenames: Duet is sure to push your mind to the limit!

Go Undercover!
In Codenames: Duet, players must work together to uncover all the secret agents on both sides of the key card before they run out of turns. You'll need to be quick-witted, because these challenges will put your deductive skills to the test!

It Takes Two to Tango!
You and a partner will pick a key card and set up the grid of words. You'll take turns, going back and forth, giving each other clues to guess as many words as possible before passing to the other player. On their turn, a player gives a word and a number as their clue and the other player makes guesses as to which words hide a hidden operative. Correct guesses are covered in a green agent card, if a player guesses a word that is black on your key card, the game is over and you lose. If a guessed word is tan on the key card, that is an innocent bystander and the turn ends with you taking a token from the time bank and placing it on the guessed word. If the two players can guess all 15 hidden operatives before running out of turn tokens, they win the game!

Sudden Death
If players run out of time, they enter sudden death, relying on previous clues to guess where the remaining operative are hiding. If a word is guessed correctly, the guessing continues, but if a bystander or assassin is uncovered, the game is over and the players lose.

More Ways to Play!
Codenames: Duet is designed for two players, but it can be played with a group. Players will split up into two teams and play the game as normal, any member of a team able to give the clue. Teams may privately discuss their clues to come up with the perfect one!

Players may also embark on a campaign using the Mission Map pad. Each completed game will let you move on to new and more challenging missions that change the number of turn counters and bystander tokens. Some missions reduce the number of turns you have while other leave less room for error. After completing these challenging missions, you can consider yourselves Codewords masters!